Important guidance during COVID-19: Click here to learn about the precautions we're taking to protect the health of our visitors during the COVID-19 pandemic.
(818) 909-5009 — Call The Premier Regenexx Regenerative Orthopedics Provider Serving Southern California

Dr Blecher specializes in Primary Care Sports Medicine and has been practicing at the prestigious Southern California Orthopedic Institute (SCOI) for over 15 years where he has had the opportunity to care for a wide range of patients. From Little League to high school, to collegiate, to elite and professional athletes; Olympic champions, weekend warriors and award-winning entertainers have all entrusted their care to Dr Blecher to recover from their injuries in a quick, non-surgical manner.

Following residency, he completed a sports medicine fellowship at the world renowned Cleveland Clinic Foundation in Ohio. His fellowship responsibilities included the NFL Cleveland Browns and NBA Cleveland Cavaliers, as well as Cleveland’s professional hockey team and NCAA Division I collegiate soccer, volleyball and wrestling teams. The fellowship also provided him the opportunity to participate in the NFL combine and Cleveland Indians spring training. Additionally, Dr. Blecher has been part of the medical team for national and international events, including the Gravity Games, the U.S. National Gymnastics Championships, and the Ironman Triathlon in Kona, Hawaii.

A Diplomate of the American Board of Family Practice, Dr. Blecher is a member of the American Medical Society for Sports Medicine, and is also Board Certified in Sports Medicine. Additionally, he was also awarded the “Pioneer Certificate” for being one of the first to be registered in musculoskeletal ultrasound with the ARDMS certification.

Dr. Blecher provides medical orthopedic care to athletes of all ages and specializes in sports health and medical conditions related to sports participation. He provides pre-participation physical exams, exercise and rehabilitation prescriptions and has an interest in nutritional and sports supplements. He lectures extensively on current sports medicine topics such as cartilage disorders and early arthritis in the athlete. As a runner himself, he also has a special interest in running injuries. Another area of interest is concussion in the athlete. Dr Blecher has years of experience evaluating and managing concussions on the sidelines as well as in the office. He has lectured extensively on the subject at many grand rounds and national conferences such as the National Summit on Sports Concussion. He was also one of the first Certified ImPACT Consultants in the greater Los Angeles area. Dr Blecher has also served as an expert witness in landmark cases involving athletes with head injuries.

Dr. Blecher is also a leader in the growing field of Regenerative Medicine for joints, tendons and ligaments. Using biologic techniques such as Platelet Rich Plasma (PRP) Therapy, and Stem Cell Treatment, as well as advanced imaging such as Musculoskeletal Ultrasound, Dr. Blecher is able to accelerate healing for many acute athletic and orthopedic injuries, as well as provide non-operative, minimally invasive treatment for many musculoskeletal injuries that would otherwise require surgery or become chronic untreatable conditions.  He was the first certified Regenexx provider in Los Angeles and has lectured nationally and internationally on the use of Stem Cells and PRP in athletes.  He is also one of a select group of U.S. physicians to provide international concierge travel medicine procedures such as cultured stem cell treatment.

Dr. Blecher has been named a Los Angeles Top Doctor and he currently serves as a team physician for Los Angeles Valley College, College of the Canyons (Valencia, CA) and Campbell Hall High School (Studio City, CA). He has also served as a medical consultant for ESPN and as a treating physician for the Summer X-Games in Los Angeles, as well as the WTA LA Women’s Tennis Championships and USTA Men’s Tennis Farmer’s Classic. Dr. Blecher is also the Medical Director of the Center for Rehabilitation Medicine at SCOI and is the Director of the SCORE Concussion Program.

As a Clinical Instructor for UCLA and CSUN, Dr Blecher also serves as an educator for Sports Medicine Fellows and Sports Medicine Athletic Training Students.  He has also invented numerous braces and is involved in several ongoing research and development projects to help the next generation of athletes.

In his free time, Dr. Blecher has enjoyed traveling, hiking, tennis, racquetball, soccer, skiing, whitewater kayaking, SCUBA diving and spending time with his family. Having undergone multiple back surgeries himself, he has a personal understanding of what patients and athletes go through to try and return to what is most important to them. He is looking forward to meeting you.

Use of Diagnostic MSK U/S for assessing chondral surfaces of the knee
Blecher AM.  Ongoing study to determine if MSK U/S can be used to perform accurate and reproducible measurements of articular cartilage in the human knee joint. 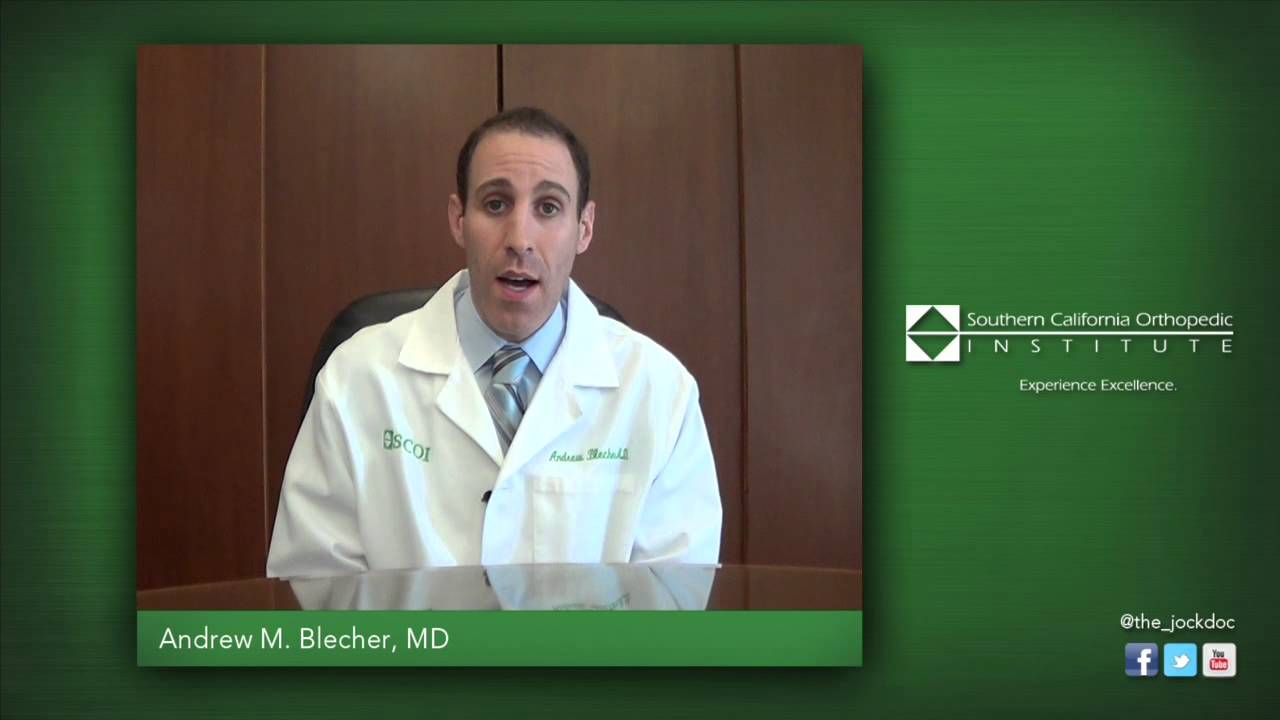